Here are the most frequently asked GK quiz about World Geography. Thus general knowledge questions and answers are specially created for students of all competitive exams.

It will improve your interest and help to improve your grade in competitive exams, including UPSC, State PCS, IBPS, SBI, SCC, Railways, etc.

This section comprises all the main facts about world geography from the examination point of view. 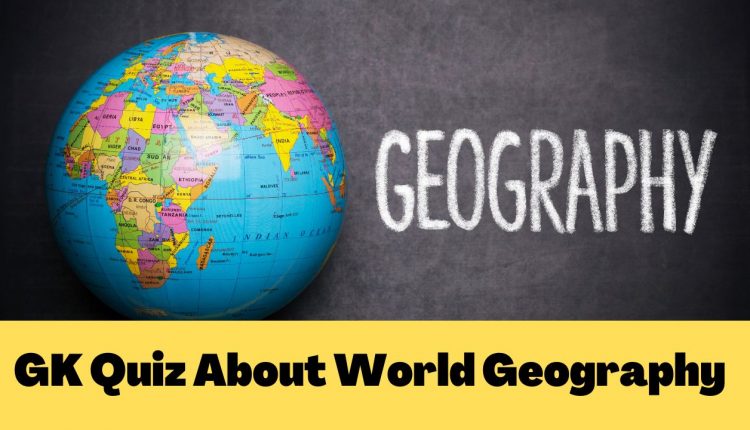 What is the name of the borderline between India and Myanmar?

In 1834 the Kabaw Valley areas were returned to Burma, and a modified boundary was delimited in this region, dubbed the ‘Pemberton line’ after a British commissioner, later refined in 1881. Finally, in 1837 the Patkai Hills were unilaterally designated as the northern boundary.

Which Indian states share a maximum boundary with Myanmar?

Which European country is known as the lake of thousand lakes?

Finland is also known as “the land of a thousand lakes,” There are around 167000 lakes and 179,000 islands in Finland. Saimaa, its biggest lake, is Europe’s fourth-largest.

Which European countries have a coastline with the Atlantic ocean?

Four European countries share international borders with the Atlantic ocean. Thus four-nation is known as Ireland, France, Spain, and Portugal, covering a vast area and diverse ecosystems. These ecosystems are broadly split into the Celtic Seas, the Bay of Biscay, and the Iberian Coast.

How many countries have coastlines on the Atlantic Ocean and the Mediterranean Sea?

What is the only European country with an Atlantic Ocean coastline?

Which non-metal is most abundant in the Earth’s crust?

The most abundant non-metal on the Earth’s crust is oxygen.

Which is the first and most abundant metal in the Earth’s crust?

Aluminum is the most abundant metal in the Earth’s crust and is never found free. The Earth’s aluminum has combined with other elements to form compounds.

Which country has no mountain?

Denmark is the only country in the world with no mountains, and no place in Denmark is more than an hour’s drive from the sea. Denmark is a flat, seaside country with an average elevation barely above sea level. Møllehøj is the highest spot in Denmark – with an elevation of just 171 meters (561 feet)

Which state is called the yarn bowl of India?

Tamil Nadu is India’s ‘Yarn Bowl’ and produces 40% of the total Yarn in India.

Which state is called the fruit bowl of India?

Himachal Pradesh is known as the Fruit bowl of India.

Which place is known as the village of the temple?

Maluti is a tiny village in Jharkhand with more than 70 beautiful terracotta temples dating back to the 17th century. Hence, it is known as the village of temples. It originally had an auspicious number of 108 temples, of which only 72 survive today.

Which city is known as the city of weavers?

Panipat is a historic city in Haryana, India. It is also known as the “City of Weavers” and “Textile City.”

Which city is known as the cotton polis of India?

Which city is known as the City of Lights in India?

Varanasi is known as the City of Lights in India.

What is the deepest lake in the world?

Lake Baikal, in Siberia, has the reputation of being both the deepest lake and the biggest freshwater lake in the world, holding more than 20% of the unfrozen fresh water on the surface of Earth.

Which country has only one city?

Singapore is the only country in the world have only one city.

Which country is the youngest in the world?

The newest nation in the world as of early 2022 is South Sudan, which split from Sudan in 2011 and is known as the youngest in the world.

Which country is the smallest in Africa?

Saint Helena, Ascension, and Tristan da Cunha is the smallest country in Africa.

Which country has the most beach resorts?

Thailand has more than 1250 beach resorts.

Where is the oldest castle in the world?

Windsor Castle is the oldest and largest inhabited castle in the world, a royal residence in Berkshire, England.

What is the Land of grass?

Which country has no trees?

According to the World Bank’s definition, there are four countries with no forests: San Marino, Qatar, Greenland, and Oman.

Which city is known as the tiger state of India?

Nagpur is also known as the “Tiger Capital of Indi” or “the Tiger Gateway of Indi” as it connects many Tiger Reserves in India with the world.

Which is known as Pearl city in India?

Hyderabad is known as the City of Pearls. It was due to its promising pearl processing and trading industry in Hyderabad, providing the best pearl jewelry to India and the rest of the world for more than 400 years.

Which is known as Black City in India?

Kolkata is also known as the Black City. The Black Hole of Calcutta is the name for a location in then-British-run Fort William on the River Hooghly.

Which city is famous for mango?

Srinivaspur in Kolar is nicknamed the Mango City of India as over 63 species of mangoes are found here. It is also the biggest producer of mangoes in Karnataka.

Which city is known as Brown city?

Jaisalmer is also known as ‘Brown City’ ‘r ‘Golden City,” which derives from the color of its gorgeous dunes in the Thar desert.

Which is the largest artificial lake in the world?

Lake Kariba is the world’s largest artificial lake and reservoir by volume. It lies 1,300 kilometers (810 mi) upstream from the Indian Ocean, along the border between Zambia and Zimbabwe.

What country in Africa is the only island?

Though a small island, it has already attracted many visitors from all across the world. The East African island map will guide you through Madagascar, situated off the coast of Mozambique.

What Land is the Sand village in?

How many countries have no rivers?

Currently, 20 countries and 22 territories do not have a permanent natural river flowing, though some have streams or seasonal watercourses such as wadis.

Which is the world’s longest river?

Nile River – The longest river in the world. 6,650 km in length, the Nile River of North-East Africa is the lifeline of several countries.

Which country is called the country of canals?

Pakistan is also known as the country of Canals. It is because Pakistan has developed an extensive network of canals from the Indus and its tributaries.

Which country is called the Land of milk and honey?

Israel is located in the Middle East, along the eastern coastline of the Mediterranean Sea, bordered by Lebanon, Syria, Jordan, and Egypt. It lies at the junction of three continents: Europe, Asia, and Africa. Long and narrow in shape, the country is about 290 miles (470 km.)

Which country is called the Land of Flowers?

The Netherlands is the Land of flowers.

Which country is called the city of tulips?

Holland is a small country between the North Sea, Germany, and Belgium. When you think of Holland, several things come to mind; art, cheese, windmills, Amsterdam, Rotterdam, endless beautiful landscapes, and of course, blooming tulips.

9 Beautiful But Deadly Poisonous Frogs in the World

The Heaviest Living Reptiles In The World